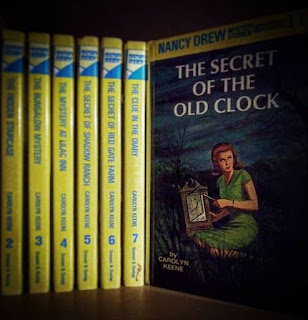 The Nancy Drew Mystery Stories by Carolyn Keene is a book series that my mom introduced to me in middle school. I remember falling in love with it immediately, so as part of my quest to read my way through my childhood, I had to reread it again. Of course, I started with the first book in the series, The Secret of the Old Clock (Nancy Drew Mystery Stories, #1). There were a few things that ran through my mind reading it as an adult that I know I didn't think of as a child.

Most importantly, this book was originally published in May 1930, and I didn't give it a second thought that cars were still relatively new in the United States and that it was highly unlikely that an eighteen year old would have their own car let alone a convertible. What surprised me the most is that at least the first book had been rewritten since its original publication date. So, I have purchased a copy of what is supposed to be the original story through ThriftBooks.com. I am hopeful that it really is the original story, and I can't wait to compare the two versions.

Other things that I didn't really think much of when I originally read this story as a kid is that Nancy's dad, Carson Drew, is an attorney, and he obviously is a very good lawyer because he has a live in housekeeper that also has served as a nanny of sorts for Nancy. That isn't a common thing for people who are middle class. Then, there is the clothing stores where customers actually have a seat and wait for a sales clerk to wait on you. Wow, times sure have changed since then! And, the writing in The Secret of the Old Clock (Nancy Drew Mystery Stories, #1) is very mature. I think kids today would be shocked at some of the words that are used because they aren't commonly used words today . . . words like shan't.

The Secret of the Old Clock (Nancy Drew Mystery Stories, #1) is extremely well written and held my interest even as an adult. I even think children today would enjoy this first installment in the series despite it missing some of the modern conveniences of today like cell phones and computers. I gave it four out of five stars.

Synopsis of The Secret of the Old Clock (Nancy Drew Mystery Stories, #1) by Carolyn Keene:  By pure chance, Nancy Drew witnesses a little girl named Judy fall off a bridge and rushes to help her. When she helps Judy home, Nancy gets roped into searching for the missing will of Josiah Crowley, which supposedly leaves money to Judy's aunts.