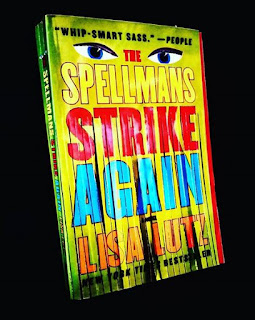 Recently, I decided to reread The Spellmans Strike Again (The Spellmans, #4) by Lisa Lutz, and it was just as good as I remembered it to be.  Part mystery, part humor, it sucked me in from the get go.  This particular book series is so unlike any other books I've read that I've often wondered how Lisa Lutz came up with the idea for the series.  One day I'll eventually see if I can find out the answer to my musings.

The character development and imagery is so well done that as I read The Spellmans Strike Again, it was like watching a movie in my mind.  I would love for the series to be developed into a movie or television show, but as far as I know, there is no plan for that happening.  I've come to love every character in the series . . . okay, maybe not Harkey, but you get the picture.  They are so endearing, even the ones that have annoying personalities.

There isn't one bad thing I can say about this book or any of the others in the series.  It gave me all the feels and was like visiting with an old friend.  If you're looking for a light hearted, fun mystery, then this is the book for you.  I gave The Spellmans Strike Again five out of five stars and urge people to read every book in the series (in order).

Synopsis of The Spellmans Strike Again (The Spellmans, #4) by Lisa Lutz:  Isabel "Izzy" Spellman has taken over the family business in San Francisco . . . private investigation.  Her top cases involve digging up some dirt on the competition, a missing employee of a millionaire, and freeing an innocent man from prison.  On top of that, Izzy's mother is blackmailing her.