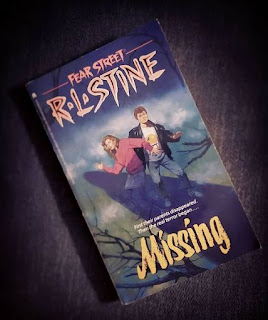 Mark and Cara Burroughs' parents were late coming home, so they decided to throw a party after school. When their parents still hadn't come home or called that night, the siblings aren't too worried as this is typical behavior of their parents. As the days go by with no contact with their parents, Mark and Cara begin to panic and contact the police. Missing (Fear Street, #4) by R.L. Stine will have you on the edge of your seat to the end.

I was excited to reread Missing (Fear Street, #4) in my quest to reread my way through my childhood, especially after The Overnight (Fear Street, #3) by R.L. Stine was such a great book. However, the fourth installment of the Fear Street book series was not one of my favorites.

The biggest issue I had with it was that the first few chapters kept repeating some of the same information over and over. An example of this was reiterating that Mark was the shy, introverted sibling, and Cara was the outgoing sibling that wasn't afraid of anything. I don't necessarily blame the author for this. It's something that should have been caught in the multiple editing rounds in my opinion.

Another issue I had was that the story was told by both Mark and Cara because there were times when it wasn't always clear at first as to who's perspective it was being told from. The execution was a bit clumsy, and it detracted from my enjoyment of the story. Normally, this doesn't bother me in a book . . . Confessions on the 7:45 by Lisa Unger was told from multiple characters and was done well, and I absolutely loved that book.

One of the characters I knew was the "bad guy" right from the start, and I knew this when I read it all those years ago when I was a teen. There were several characters that were written in a way that you didn't know if they were a "bad guy" or a "good guy", so that was unexpected for a book in the young adult horror genre.

All in all, Missing (Fear Street, #4) by R.L. Stine was just an okay read for me. There were parts I should've easily figured out as an adult and didn't, which I am embarrassed about. I gave it three out of five stars for the reasons mentioned above.

If you liked Missing (Fear Street, #4) by R.L. Stine, you may like Temptation (The Secret Diaries, #1) by Janice Harrell.