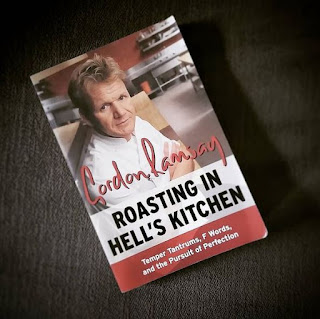 Roasting in Hell's Kitchen: Temper Tantrums, F Words, and the Pursuit of Perfection by Gordon Ramsay takes a mind-blowing look into the life of Gordon Ramsay. From his tough childhood to his father's alcoholism and brother's heroin addition to a failed soccer career, you'll learn what made Gordon Ramsay the chef he is today.

Several years ago, I stumbled on to a reality show on the Fox Network called Hell's Kitchen, which was in the middle of its third season. There was nothing else on television so I wanted to see what this "new" show was all about, and I immediately fell in love with it. Much to my surprise, it had two previous seasons. (I still don't know how I hadn't heard about this show before then.)

From there, I fell in love with the show Kitchen Nightmares, 24 Hours to Hell and Back, and all things Gordon Ramsay. When he came out with his autobiography, Roasting in Hell's Kitchen: Temper Tantrums, F Words, and the Pursuit of Perfection, I knew I had to buy the book and read it.

One of the things I was most surprised about was that Ramsay was born in Scotland, not England and grew up in poverty. The other being that he was on track to having a soccer career until he tore some cartilage in his knee that kept him from going further with it. It was also interesting to learn that he worked in a French restaurant without knowing a word of French! I was shocked to learn how his father struggled with alcoholism and violence, and the way he treated everyone was horrifying.

I have to say I have a new found respect of Gordon Ramsay with all he had to go through in his childhood. I don't want to give too much away, but Roasting in Hell's Kitchen:  Temper Tantrums, F Words, and the Pursuit of Perfection is well worth the read and getting to know Ramsay behind the television persona that has been created . . . everything isn't always what it seems. I gave it four out of five stars.

If you liked Roasting in Hell's Kitchen:  Temper Tantrums, F Words, and the Pursuit of Perfection, then you'll like Here's the Story:  Surviving Marcia Brady and Finding My True Voice by Maureen McCormick.