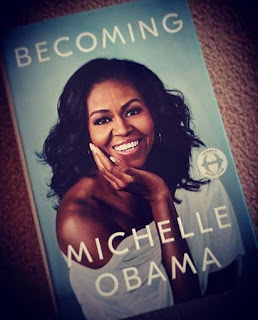 When Becoming by Michelle Obama was published, I was interested in reading the former First Lady's life story. That interest grew when I started hearing rave reviews about it. One year ago, I made the trek to my local Barnes and Noble Booksellers and purchased the hardcover of Becoming. Within a couple of weeks, I started reading it but put it aside for awhile. Eventually, I picked it back up and began reading the autobiography again. I was not disappointed.

I always knew that Michelle Obama was a very smart and classy lady just from listening to her speak and how she acted from television news stories, but I didn't realize how much so. On top of that, she is a very talented writer. I'm very picky about the non-fiction books I read because the topic has to interest me and be written well.

There were several things I learned about about Michelle Obama's personal life that I had no clue about. One is that she graduated from Princeton University and Harvard Law School. I didn't know that her father had multiple sclerosis and that he succumbed to complications from it.

My favorite part of her life story is how she and Barack Obama would get into disagreements about marriage. Michelle believed in the institution of marriage, and Barack did not. Then, one night they went out to a restaurant for a multi-course meal and ended up having a disagreement about it at the restaurant. This disagreement was cut short when the waiter brought Michelle's dessert and removed the lid covering it to expose a box with an engagement ring. I love the fact that Barack compromised and married Michelle because it was something that was very important to her. Where can I find a man like Barack Obama?

I definitely recommend Becoming by Michelle Obama and gave it five out five stars for being well written, interesting, and informative.
Follow Us On Social Media