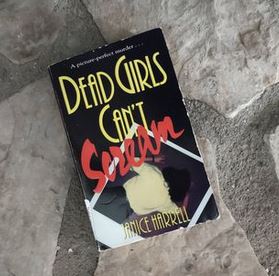 In Dead Girls Can't Scream by Janice Harrell, Laurie jogs by the same corner every day, but on one particular day, she sees something she's not supposed to see . . . a body being stuffed into the trunk of a car. The psycho killer knows he has to kill Laurie now that she's seen him. Will she live or die?

As a teenager, I was a huge fan of The Secret Diaries trilogy and The Murder Game by Janice Harrell. Whenever I'd go to Waldenbooks bookstore at the mall, I was always eager to see if they had any other books written by her. Unfortunately, they rarely had any other books by this author other than the Vampire Twins series.

Fast forward to this year when I found out that Netflix was releasing three Fear Street movies based on R.L. Stine's book series of the same name. It made me want to reread through that book series and some of the others I had grown up on. I went on ThriftBooks.com to see if there were any books by Janice Harrell that I was unaware of, and I came across the book Dead Girls Can't Scream. I had no idea that she had written any books other than the ones I mentioned above. Excited, I decided to order it, and I just recently finished reading the book.

Where Dead Girls Can't Scream was written well for the target audience, I felt like it didn't have panache of The Secret Diaries or The Murder Game. Maybe if I had read it as a teen, I might have felt differently, but it just wasn't as good compared to her other novels I've read. Don't get me wrong, it was still written exceptionally well, and I enjoyed reading it even as an adult.

Janice Harrell did a good job at throwing suspicion on three different characters, which kept me on my toes. I wasn't really sure if any of them were the actual killer though because I felt like they were the obvious suspects, but I didn't have anyone else that I really suspected. I was shocked at who was revealed to be the killer. Looking back, it was a bit obvious that it was that character, so I don't know how I missed picking up on those clues. I'll blame it on the fact that I was reading Dead Girls Can't Scream in the wee hours of the night.