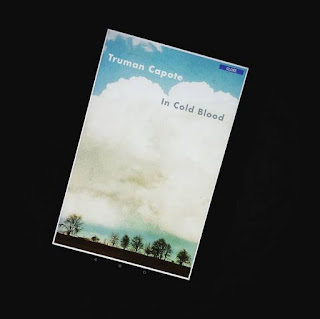 On November 15, 1959 in Holcomb, KS, four members of the Clutter family were murdered at their home. There are few clues and no motive that the police can find. Truman Capote takes a look at the murders that Perry Smith and Dick Hickock were convicted for in his non-fiction / true crime book In Cold Blood.

What made me pick up a non-fiction book such as In Cold Blood? I don't recall why it interested me, but I'm sure it came up somehow in a book club discussion at some point. Not knowing anything about the story or the author, I wasn't sure what to expect when I read it. The brutality of what happened to the Clutter family is absolutely horrifying, and the reasoning behind it was truly awful. You'll have to read the book to find out.

The first two-thirds or so of In Cold Blood was a fast paced and interesting read, but the last third of the book was painfully slow, so much so that I put the book down for several years before picking it up again and finishing. I was surprised to learn that hanging was still a form of capital punishment in the 1960's. It seems so barbaric, especially when Capote was describing one of Smith's and Hickock's cellmates taking something like twenty minutes before dying.

I gave this book three out of five stars for the reasons stated above. It isn't for the feint of heart. If you enjoyed In Cold Blood by Truman Capote, then you may like Helter Skelter Vincent Bugliosi or Seven Days of Rage: The Deadly Crime Spree of the Craigslist Killer (48 Hours Mystery) by Paul LaRosa.