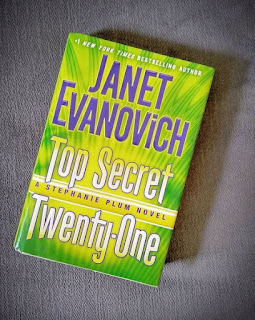 Top Secret Twenty-One (Stephanie Plum, #21) by Janet Evanovich tells the story of Stephanie Plum, a bounty hunter, trying to find and bring in Jimmy Poletti, who was selling more than cars in his dealership. With the help of her boyfriend, Joe Morelli, Stephanie keeps running into dead ends, so she agrees to protect former security guard Randy Briggs in hopes that he will lure out Poletti.

Some of the books I've read recently were a bit dark, so I was looking for something a bit lighter, a beach read if you will. So, I decided to read Top Secret Twenty-One by Janet Evanovich. This installment of the Stephanie Plum book series did not disappoint me, and it had me literally laughing out loud.

It seems as though Joe and Stephanie are getting a little more serious about each other in this installment, so I hope they at least get engaged in one of the books that comes after this one. But, let's face it, that probably won't happen, so I won't get my hopes up too high.

I love that Janet Evanovich brought Randy Briggs back into the series because it did freshen it up a bit instead of having the same characters that do the same things over and over. However, I hope he doesn't play such a large role in future books because I think it will make the series become staler. Other things I liked about the book include Ranger needed Stephanie's help instead of it being the other way around and the bathroom scene with Grandma Mazur.

Five out of five stars is what I gave Top Secret Twenty-One (Stephanie Plum, #21) by Janet Evanovich, and I'm looking forward to reading the rest of the books in the series. If you enjoyed this book, you may like Luck, Love & Lemon Pie by Amy E. Reichert.