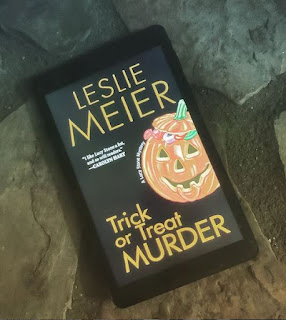 Trick or Treat Murder (A Lucy Stone Mystery, #3) by Leslie Meier is set in Tinker's Cove, Maine, and the entire town is preparing a party in a dilapidated mansion to celebrate Halloween. However, everyone is on edge because there has been a rash of fires thought to be the work of an arsonist. The latest one killing a summer resident. Who will be the latest victim?

Is anyone else a fan of Halloween like I am? This was the perfect book to put me in the mood for the holiday, and this is a must read if you do like Halloween. It brought back so many memories of my childhood of trick or treating and the Halloween parties that my parents and the rest of the parents in the neighborhood put on for us kids that were similar to the one in Trick or Treat Murder.

Having an arsonist setting fires in the book only made it creepier, but not scary. There were quite a few red herrings in the book. With that being said, there were clues to who it really was, and I dismissed those clues much to my chagrin.

The side story of Trick or Treat Murder is about the pitfalls of motherhood and having a new baby. Some of the things Leslie Meier talks about in the book is breastfeeding and not being able to keep up with the housework, so if either of these things are perplexing to you, you probably should pass on this book because it's mentioned quite a bit. With that being said, it didn't bother me in the least, but you never know what might upset people.

Four out of five stars is what I gave Trick or Treat Murder (A Lucy Stone Mystery, #3) by Leslie Meier. If you enjoyed this book, I'd recommend Plum Spooky (Stephanie Plum, #14.5) by Janet Evanovich, or for those who read books in the Young Adult genre, I recommend Trick or Treat by Richie Tankersley Cusick.