Book Review: A Catered Wedding (A Mystery with Recipes, #2) by Isis Crawford 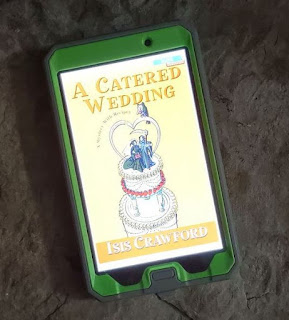 A Catered Wedding (A Mystery with Recipes, #2) by Isis Crawford is a cozy mystery that takes place in New York. When Leeza Sharp is found murdered on the morning of her dream wedding, caterers Libby and Bernie Simmons take it upon themselves to figure out who murdered Leeza and why.

This installment in the A Mystery with Recipes series, A Catered Wedding, was definitely written better than its predecessor A Catered Murder for the simple reason that the author refrained from using as many unnecessary synonyms for words that didn't need a fancier meaning. Don't get me wrong; she still did this, but just not as often. A prime example is she used the word lummox when clumsy or klutzy would have worked just as well. Another illustration of this is that when a character was eating a cookie, and instead of just saying he put it in his mouth or ate it, Isis Crawford wrote that he "conveyed it to his mouth".

At one point in the story, one of the supporting characters talks about how his father runs ten miles a week and insinuates that it is a lot of miles being logged. For people who don't run, I guess that seems like a lot, but it really isn't unless he does it in a day or two as his long run.

Although this was a cozy mystery, I didn't correctly guess who the murderer was much to my dismay. Don't worry. I won't spoil it for those who haven't read it. I gave A Catered Wedding (A Mystery with Recipes, #2) by Isis Crawford three out of five stars. I will likely read more of the series as the books are a quick read and hold my attention.  If you enjoyed this book, I recommend Killer Cupcakes (Lexy Baker, #1) by Leighann Dobbs.