Book Review: It by Stephen King 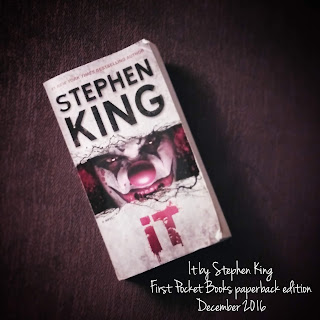 With the remake of the movie It coming out in the fall, I decided to read the book by Stephen King because I wanted to see the movie but not without first reading the book.

In the month of May, I began reading It, and it took me four months to read it . . . 4 friggin months! Now, I did take a one week break where I read three other books, but the length of It was a bit too long for my liking. In the version I read, it was close to 1,500 pages! With that being said, I'm not sure that anything could have been cut from the book because it would have lost that wow factor for me.

It's hard to believe that It was written in 1986 because it feels like it was written more recently. The only exception would be the references to things like Waldenbooks, which went out of business officially in 2011. However, most of them were gone in my area by 2002, so I became a bit nostalgic when I heard this bookstore mentioned. Bullying plays a large part in this book, which makes it still relevant to the present day because it seems like kids being bullied is becoming more and more common. Or, it could be that we're more aware of it now because of the internet.

Approximately halfway through the book, Bill thinks, "Bowers and Huggins and Criss, oh my!" It makes me wonder if Stephen King had watched The Wizard of Oz at some point while writing It because Bill's thought automatically made me think of when Dorthy says, "Lions and tigers and bears, oh my!"

At one point in It, there is a reference to a gravel pit, which made me think King's novel Desperation because a gravel pit plays a big part in that book. Only having read of four of Stephen King's books, it makes me wonder if he pulls certain elements from past books to include in his newer books.

There were quite a few adult themes in It, which I won't go into, but I definitely can see why I wasn't allowed to read any Stephen King books growing up. That and the fact that an animal was killed by poisoning along with other tidbits of animal cruelty, which I absolutely hated and the main reason I gave this book only 4 out of 5 stars.

Want a balloon? We all float down here. 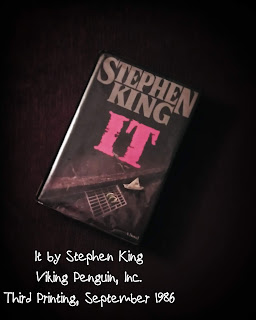 Pennywise the Clown . . . it is a very good thing that I have never been afraid of clowns, but maybe if I had read the book when I was in middle school, I might be because this clown is one super scary clown. I can't wait to see the original film version of It so I can compare the two actors who played Pennywise to see who I thought was scarier  . . . Tim Curry or Bill Skarsgard.

All in all, It was a super creepy read, but the book didn't scare me that much. Don't get me wrong, my heart pounded in a few places, but I found Desperation to be much scarier because it actually gave me nightmares when It didn't. However, I enjoyed It a lot and definitely recommend that everyone reads this book.

Synopsis:  The town of Derry has something terrible lurking in the storm drains and sewers that takes the shape of children's worst nightmares and hunts them down. The adults in Derry are oblivious of what is lurking in their town. Join the Losers Club as they fight It as children and promise to come back to kill it if needed as adults.

Labels: desperation It movie pennywise the clown stephen king the losers club the wizard of oz waldenbooks we all float down here
Location: Derry, ME