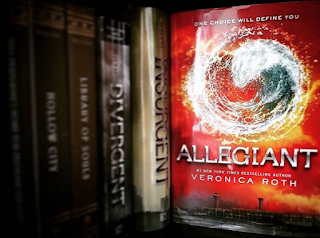 After video footage reveals that there is life outside the city limits, the social system is in chaos with the factions disintegrating. Tris, Tobias, and their friends are on a mission to find out what life is like outside of their city. Soon, they find themselves at a government agency where they find out that their lives have been a lie as the government has been experimenting with everyone living within Chicago.

Picking up almost immediately where Insurgent left off, I was happy that all the books in the series were already published when I began so I didn't have long to find out what happened in the concluding book of the Divergent Trilogy. Unfortunately for me, as I was reading Allegiant, a big plot point was revealed to me, and it made me unhappy for a couple of reasons. Why would someone ruin the ending of a book for another person when they know you're still reading it? Hearing this information almost made me not want to finish the book. However, I wanted to read it for myself so I knew what else happened and what led up to that one event in the story, so I persevered through the book.

What I liked about the book is that I really could see a scenario similar to the plot actually happening in the near future, especially with all the experimenting that goes on in the science world, and it seems like the social structure is already starting to fall apart. (This is in no way meaning I want to get in a political debate with anyone, and any political debates made in the comments will be deleted whether I agree with you or not.) Based on what I've heard about the book 1984 by George Orwell, it seems as though Allegiant has a lot of similar themes, and it makes me want to Orwell's book so I know one way or another.

I also enjoyed the fact that it alternated between the perspectives of Tris and Tobias / Four. I wish the entire series could have been written similarly . . . not necessarily just the perspectives of Tris and Tobias, but from the perspectives of a lot of the other characters. It would have allowed us to get to know the other characters better, even the ones I didn't like. As for the pacing goes, it was vastly different from Divergent and Insurgent. The first half  had a lot going on and was action packed. The second half was very slow in comparison, which is why Allegiant took me the longest to read . . . it took met a whopping 15 days to finish.

Overall, I enjoyed Allegiant, but I gave it three out of four stars because of two reasons . . . it wasn't the ending I wanted, and the story line dragged a little for me.