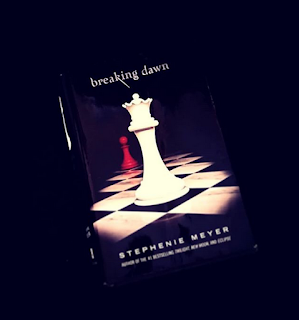 Like with all the other sequels in the Twilight series, I couldn't wait to start Breaking Dawn and see what the conclusion of the series would bring. The longest book in the series at 756 pages, Breaking Dawn doesn't read like other books of this length. I flew through the pages, and upon a second read through, I noticed a ton of details I missed the first time around. Out of all the books in the series (Twilight, New Moon, Eclipse, and Breaking Dawn), the last installment was my favorite one.

The anticipation of whether or not Bella Swan would actually be turned into a vampire by Edward Cullen had my stomach in knots. The first half of the book didn't have a lot of action in it. It was basically about Bella and Edward getting married and their honeymoon. The second half of the book had all of the action in it and a lot of what ifs.

I love the fact that we meet a lot of the vampires from all over the world . . . for those that have lived under a rock and haven't read the book yet, I won't spoil the how or why we meet them. We also get more insight into Leah and Seth . . . sister and brother werewolves who were introduced to us in a previous installment. I ended up really liking Seth and is probably my favorite character out of all the werewolves. Rosalie also plays a much larger role in Breaking Dawn than she did in all the other books. Even though we see a nicer side of her, Rosalie is still my least favorite character out of all the vampires. Although, a couple of the things she said made me laugh. 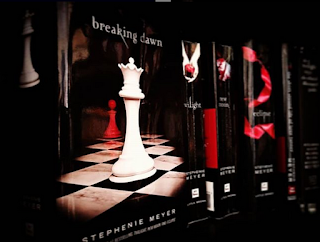 Stephenie Meyer did write this installment a bit differently than all the others. It is broken into three parts. Part one and part three are told from Bella's perspective. Part two is told from Jacob Black's perspective, which was my least favorite part as by this time, Jacob had really gotten on my last nerve. I would have much rather had the second part told from another character's point of view.

Overall, Breaking Dawn was my favorite book out of all of the series. It is also has the most mature content, so I wouldn't recommend this to anyone under the ages of thirteen. I gave it five out of five stars.

Synopsis of Breaking Dawn:  Bella Swan must finally make her decision of whether she will become a vampire or not and the consequences of her choice. While on her honeymoon with Edward Cullen, a surprise complicates their lives and puts the entire Cullen clan at risk.