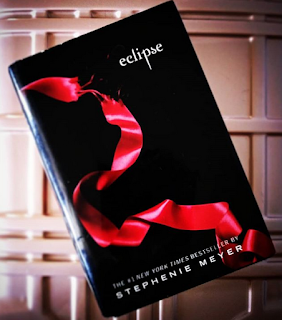 Immediately after finishing New Moon (Twilight, #2) by Stephenie Meyer, I apprehensively picked up Eclipse (Twilight, #3) and dove right into it. I was worried that it would read much like the book before, but I was pleasantly surprised about how it was much more enjoyable. Despite the fact the hardback version was 629 pages, I finished it within 1 to 1.5 days. I even took it to work with me so I could read on my lunch hour. I also stayed up to three or four o'clock in the morning to finish the book if that tells you anything.

I love the fact that the worlds of vampires and werewolves are finally intertwined into one story unlike the previous two books where they were separated. There was a lot more action in this installment as well with Victoria wanting to avenge her mate and the Volturi coming to check up on the Cullens to make sure they held up their end of the bargain.

Eclipse is the book that made me fall in love with the character of Jasper Hale (aka Jasper Whitlock). We learn so much more about his story line and what a great guy he really is. If Stephenie Meyer ever decides to continue the Twilight books with one offs, I would love a story all about Jasper.

As for things I didn't care for in this installment, there were very few things I can actually complain about. In fact, the only thing I can complain about is Jacob Black. Where he was a great friend to Bella Swan in the previous books, I really was tired of hearing how much in love he was with her, and I just wanted him to accept that them being together was never going to happen.


I was super satisfied with the third installment of the Twilight series, and I gave it five out of five stars.

Synopsis of Eclipse:  Seattle, Washington is experiencing a rash of mysterious murders by a vampire on the hunt for revenge. Surrounded by danger, Bella must choose between her love for Edward or her friendship with Jacob. To make matters worse, Bella's high school graduation is fast approaching and must decide whether she will remain human or become a vampire.
Follow Us On Social Media