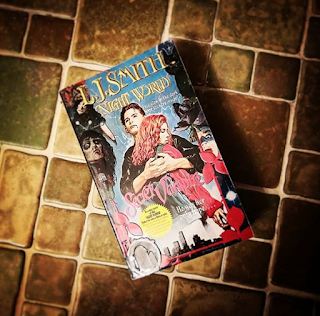 Before Twilight, there was The Vampire Diaries and Night World, both series written by the phenomenal L.J. Smith (a.k.a. Lisa Jane Smith). The first book in the Night World series is entitled Secret Vampire and was published in June 1996.

Sixteen year old Poppy North receives news that she has only months to live. When her best friend, and crush, James Rasmussen visits in the hospital, Poppy sees another side of James when he offers to make her a part of the Night World and leave her loved ones behind.

Secret Vampire (Night World, #1) was my first introduction to books on the topic of vampires when I was a teenager. I still have yet to read Dracula or Interview with a Vampire. Although, I have seen the movie of the latter many times. I recently picked up the book for a reread as I hadn't read it since I was a teen and couldn't remember much about it.

What I loved about Secret Vampire (Night World, #1) is that it deals with a serious life and death situation and choices. I won't spoil what it is, but I don't know how I would handle the situation had it been me (either as Poppy or her family). The story was exceptionally well-written, and L.J. Smith can still suck me into almost every one of her stories, even with me being an adult. And, she has a way with character development . . . there are characters you love, hate, and find annoying. On top of that, the series isn't limited to just vampires . . . it includes witches and werewolves too! I think this would make a great movie or television series.

I definitely recommend this book to those who like stories about the supernatural. Even though I thoroughly enjoyed Secret Vampire (Night World, #1), I only gave it four out five stars. The only reason I didn't give it five stars is because L.J. Smith wrote other books that I love more (i.e. The Secret Circle, Dark Visions, and The Forbidden Game).