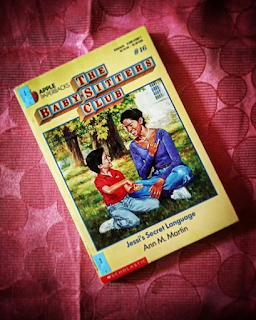 Jessi's Secret Language (The Baby-Sitters Club, #16) by Ann M. Martin is about eleven year old Jessi Ramsey agreeing to babysit two days a week for the Braddock kids, nine year old Haley and seven year old Matt. There is one catch, Jessi has to learn sign language because Matt is deaf. On top of this responsibility, Jessi auditions for her dance school's ballet production of Coppelia and lands the lead part, which adds even more rehearsal time to her already busy schedule.

There is a lot that I enjoyed about Jessi's Secret Language (The Baby-Sitter's Club, #16) because it teaches kids many life lessons that even some adults could benefit learning about. Namely being accepting and inclusive of people with special needs . . . in this case, learning sign language so that Matt could easily communicate and play with others.

I thought the book was well thought out showing how two different families dealt with having a deaf child . . . the Braddocks went out of their way to learn sign language so Matt could understand everything that went on in the family, and Katie Beth's family ignored Adele's deafness, treated her like she was a nuisance, and shipped her off to a boarding school for the deaf. It's unfortunate when families can't deal with the special needs of a family member. (I'm not being judgemental about it. I know that there are circumstances beyond people's control. The story was making a point by not showing any gray areas.) It even touched on how a sibling might feel when they have a brother or sister with special needs because many times, they need more attention or strangers react poorly. It was done very well.

The story was spot on when it came to Jessi's dance school and the jealousy of other kids. It also touched on how some schools could be political by playing favorites. I've seen this first hand from taking tap classes (eight years) and jazz (four years). Something I wondered about is if this series was ghost written like the Sweet Valley Twins series because if memory serves me right, "Coppelia" was the same production in Teacher's Pet (Sweet Valley Twins, #2) by Francine Pascal. Not being a ballet dancer, I don't know if it is a real ballet that is popular for students to perform. I guess I should look it up.

Another thing I found interesting was that Jessi arranged for the opening night performance of "Coppelia" to be inclusive of deaf people by having people sign the storyline of each act before it was performed. It made me think of the movie Mr. Holland's Opus when the music teacher had lights flashing in time with the orchestra music so his deaf son could experience a live performance.

I gave Jessi's Secret Language (The Baby-Sitter's Club, #16) by Ann M. Martin five out of five stars for taking on a more serious topic.