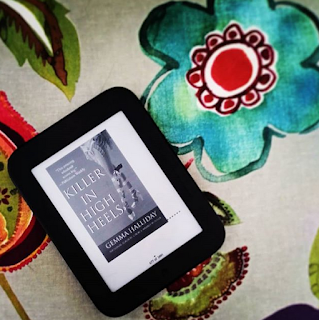 In the sequel to Spying in High Heels (High Heels, #1) by Gemma Halliday, we reunite with kid shoes designer Maddie Springer, her best friend Dana, and LAPD Detective Jack Ramirez. When Maddie receives an odd message on her answering machine from her estranged father, Larry Springer, she's determined to find out what kind of trouble he is in, and travels to Sin City (a.k.a. Las Vegas, Nevada) with Dana to investigate.

Killer in High Heels (High Heels, #2) by Gemma Halliday stays true to fashion to this series as a cozy mystery and chick lit. If you're looking for a great beach read, I definitely recommend this book because overall, it is just a super fun, light hearted read.

When Maddie brings up the topic her biological father to her mother, it's no surprise her mother isn't happy with all of the questions seeing as Larry ran off to Las Vegas with another woman named Lola and has had virtually no contact with their daughter for 26 years. This is the most realistic situation in the book, and I love the fact that Mrs. Rosenblatt gets the brunt of the anger through the waxing she's receiving. It was quite comical. However, when you find out who Lola is, you're in for a huge surprise!!

The biggest thing I disliked about Killer in High Heels was that if Larry needed to talk to Maddie, why did he block his phone number (and not leave one on the answering machine)? That's just odd to me. Something I found a bit far fetched was with as little research that Maddie did trying to confirm that her dad was still in Las Vegas, she pretty much makes a snap decision to drive out there to look for him. It would have been different if she had already verified his phone number and actual address.

I love the main character (Maddie) because I can relate to her stubbornness, especially when someone tells her not to do something, it makes her actually do it. I am the exact same way, so I find that particular character description very believable and relatable. Another character that I loved, which was a minor character in the first book, is Marco. He is the receptionist at Maddie's stepfather's hair salon and just happens to be gay. He is hysterically funny, but the one down side is that he is portrayed in a stereotypical way . . . I'm guessing the author wanted it to be abundantly clear that his character was gay.

All in all, I thoroughly enjoyed Killer in High Heels (High Heels, #2) by Gemma Halliday. It was fast paced, funny, and a great book to just take a few minutes for yourself to relax. It does have elements of suspense and romance too. And, I definitely enjoyed it more than the first book in the series. I gave it four out of five stars.