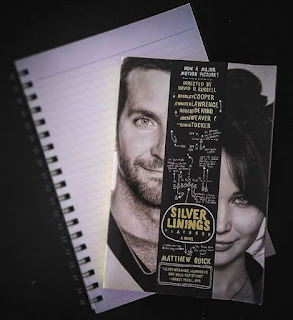 Several years ago when the movie trailer for  The Silver Linings Playbook came out, I knew I had to see the movie because it starred the actor Bradley Cooper. Be still my heart! But I knew that it was based on a book, and I am big on reading the book before seeing the movie, so I immediately ran out to Barnes and Noble Booksellers to buy the book without reading the synopsis like I typically do.

This Matthew Quick novel was interesting to say the least, and it definitely wasn't what I was expecting. The writing and story of The Silver Linings Playbook was definitely reminiscent of Stephen Chbosky's The Perks of Being A Wallflower.

The Silver Linings Playbook by Matthew Quick was very well written, but the main two characters of the book, Pat and Tiffany, really began to grate on my nerves as I progressed through the book. However, I'm not sure if that was Quick's intention or not. I think part of the reason why the character Pat grated on my nerves is although he is thirty-four years old, he acts more like a teenager. Towards the end of the book, we find out that he did have a head injury just prior to going into the mental institution. I won't go into details as to not spoil it for you, but I wonder if the head injury caused him some permanent issues where he will always act like a teenager for the rest of his life.

I honestly was surprised that this was Matthew Quick's debut novel. He did a superb job with writing a story about people with mental health issues and hope this book will help others being more compassionate to people who suffer from mental health problems. Although this book is written for adults, I think teenagers would benefit from reading The Silver Linings Playbook. Overall, I thought the book was just okay despite being well written and it being a quick read. This was one of the few times I can honestly say that I liked the movie better than the book. Maybe it was because Bradley Cooper did such a great job in the role of Pat. When it's all said and done, I gave the book three out of five stars.

Synopsis of The Silver Linings Playbook:  Pat Peoples recently was released from a mental institution, and his goal is to be physically fit and emotionally literate. He believes by doing these two things, he will have the happy ending he wants with his estranged wife. As he follows his self inflicted regiment, his life feels off and isn't going as he had hoped.