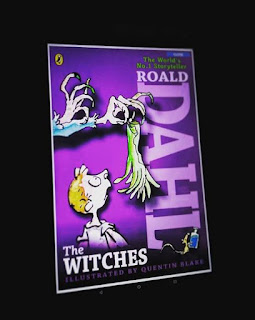 Not too long ago, I was reminded of the movie The Witches that came out in 1990. The first time I watched the movie was when I rented it from a video store in middle school for a slumber party. I remember being completely freaked out by the movie, so much so that I made my dad watch it with me and my friends. This is very out of character for me as I have watched horror movies since the age of seven; the first horror movie being Poltergeist.

Now, I know you're probably thinking, "I thought this was a book review of the children's novel The Witches by Roald Dahl." Don't worry, it is! The reason I brought up the movie is because I had no idea that the movie was based off of a book until recently. In fact, I hadn't even heard of the author Roald Dahl. Maybe if my school librarians had been better in the two different elementary schools I attended and recommended this author, I would have become an avid reader much earlier. With that being said, I'm reading The Witches by Roald Dahl for the first time ever despite being an adult.

What surprised me as I read The Witches was how close the movie adaption was to the book. And, I definitely was picturing Anjelica Huston as the "Grand High Witch", Mai Zetterling as the grandmother, and Jasen Fisher as the grandson. It brought back all the feels of the movie that so scared me, but I ended up loving. Honestly, I thought the 1990 movie outshone the book. It's not often that I feel that way.

Reading the book made me want to re-watch the movie, which I will likely do sometime in the near future because I think I have the DVD. And, there is a remake of The Witches coming out in 2020 and has some great actors and actresses attached to the newest version of the film. I'm looking forward to seeing how that adaption differs from the novel and original film. 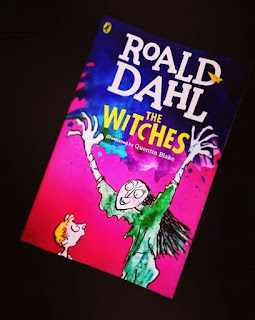 Surprisingly, there is one very serious thing that happens in the book . . . the main character's parents die, and his grandmother ends up taking care of him. Not too much time is spent on this topic, and I thought there would be a little bit more about the grieving process in it regardless of the length of the book and the age range being targeted. I also found it a bit strange that the grandson and grandmother were discussing dying at the end of the book. It's quite a mature subject for books targeting such young children. I definitely recommend parents reading this book before their children and discussing the book with them.

With that being said, if you have a child that enjoys creepiness, then The Witches by Roald Dahl would be a perfect book for them to read, especially around Halloween. And, I would definitely have them watch the movie after they finish the book. The witches in this book are completely the kind of witches one might have nightmares about . . . they are bald, have grotesque faces, and no toes. The witches must also wear masks made to look like human faces as not to be found out. To top it off, they hate children and want to get rid of them. However, if your child is easily frightened, then this is not the book for them because it definitely can cause them to have nightmares. I gave The Witches by Roald Dahl three out of five stars. Even though it was extremely well written, I felt a little disappointed in the book. I had such high expectations from the original movie, so it is likely just me and not the book.

Synopsis of The Witches by Roald Dahl:  After the death of his parents, the boy's grandmother comes to raise him. She tells him of real witches and how to tell them apart from humans. When the duo goes on vacation and encounters real life witches, the grandson overhears the witches discussing a plot to rid England of children.