Book Review: The Bounty (Fox and O'Hare, #7) by Janet Evanovich and Steve Hamilton 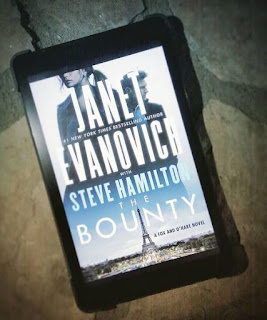 The Bounty (Fox and O'Hare, #7) by Janet Evanovich and Steve Hamilton opens with FBI Agent Kate O'Hare and con artist Nick Fox teaming up with Interpol to surveil an international organization called 'The Brotherhood' that is in search of $30 billion in Nazi gold. Kate and Nick then team up with their fathers Jake O'Hare and Quentin Fox to stop 'The Brotherhood' as they traipse throughout Europe.

To be fully transparent, I won an Advance Reader's Copy of The Bounty (Fox and O'Hare, #7) by Janet Evanovich and Steve Hamilton from a Goodreads Giveaway for free in return for my honest review. I wasn't exactly sure what to expect as this was the first book I read in the series and only had Evanovich's Stephanie Plum book series to compare it to. With that being said, I was pleasantly surprised and thoroughly enjoyed The Bounty.

It reminded me a bit of the television show Alias that starred Jennifer Garner, Bradley Cooper, Victor Garber, Michael Vartan, and Ron Rifkin, and I could see the Fox and O'Hare book series being turned into a television show or several movies. I loved the interactions between all of the characters, and there was enough background given about them that I felt like I knew the characters even though I haven't read any of the other books in the series. There was a ton of action that kept the book moving along quickly and kept my interest. I couldn't wait to find out what happened.

There wasn't really anything too negative I can say about The Bounty other than it was a bit predictable, and since the book is the latest in a series, I figured that nothing too bad would happen to the main characters. Because of this, I gave the book four out of five stars, but I like it so well that I will eventually go back and read the rest of the books in the series.