Book Review: The Last Word (The Spellmans, #6) by Lisa Lutz 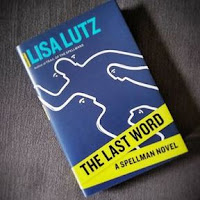 In the last installment of The Spellman Files, Isabel "Izzy" Spellman finds her parents have gone on strike since she did a hostile takeover of the family business. And, Rae has come back into the company with her own special division of it doing who knows what. To top things off, Izzy has know idea how to take care of the company finances, and when she's accused of embezzling money from a client with Alzheimer's, Izzy knows she could lose everything for her family.

Even though The Last Word (The Spellmans, #6) is the last book in this particular series by Lisa Lutz, I have hoped for years that she would change her mind and come out with another one, especially since she had a slight twist at the end that could lead it to be told from another character's perspective. However, I have come to terms that this will never happen, so rereading the entire series every so often will have to suffice. Who else becomes sad when one of their favorite series comes to an end?

This is one of those series that you must read the previous books in order before reading this one. Unlike other authors and series, Lisa Lutz writes in a way that the characters grow, mature, and age throughout the books and doesn't really take the time to recap much of what has happened in previous documents as the author likes to call them.

The Last Word (The Spellmans, #6) was my least favorite book of the series for various reasons, but I think the main reason for it being my least favorite is because there are a couple of characters who are going through some very serious medical situations . . . one character has Alzheimer's and another one ends up with cancer, so if either of these things are triggers for you, this will be a difficult read for you. Another reason it is wasn't my favorite is because the tone of the book was a bit different than the rest of the books in the series. You could almost tell that she was wrapping the series up with this book.

Three out of five stars is what I gave The Last Word (The Spellmans, #6) by Lisa Lutz the first time I read the book, and after rereading it, my rating of this book still stands. I haven't read any other books quite like this one, so it's hard for me to make a recommendation for another book if you loved this one.