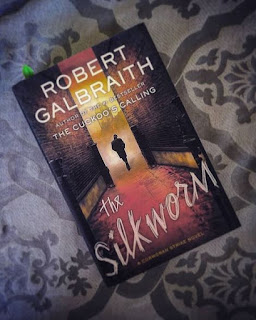 The Silkworm (Cormoran Strike, #2) by Robert Galbraith, a pseudonym for J.K. Rowling, is the second book in the Cormoran Strike book series. Comoran Strike is contacted by Mrs. Quine when her novelist husband has been missing for several days without contacting her, and she wants him found and brought home. As Strike investigates, he's finding that their might be more to his disappearance than meets the eye due to his newest unpublished novel ripping apart the people in his life. When Strike finds Mrs. Quine's husband brutally murdered, he knows he has little time to determine who the killer is.

It took me a bit to get into the second installment of the Cormoran Strike book series, but once I got a bit into The Silkworm, it moved along quite well but could've been a bit shorter. I ended up really enjoying it despite the length, and I thought it was written better than the first book in as that it wasn't quite as predictable as The Cuckoo's Calling (Cormoran Strike, #1).

J.K. Rowling does a great job with describing the characters, so much so that I was immediately able to picture them in my mind. I pictured the main character, Cormoran Strike, as actor and former football player Bob Golic and the assistant Robin as actress Kate Botsworth. I love the fact that Strike's assistant Robin had some great character development, and I kind of hopes she breaks it off with her fiance and ends up with Strike as a husband.

I gave The Silkworm (Cormoran Strike, #2) by Robert Galbraith four out of five stars for the reasons mentioned above. If you enjoyed this book, you may like The Shadow of the Wind (The Cemetery of Forgotten Books, #1) by Carlos Ruiz Zafón.