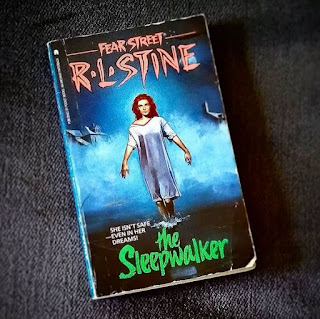 The sixth installment of the Fear Street book series by R.L. Stine is The Sleepwalker. When Mayra Barnes starts her summer job with old Mrs. Cotter, Mayra begins sleepwalking and waking up by a lake. Then, she starts suspecting that Mrs. Cotter is a witch, and on top of that, there is a strange man following Mayra. If she doesn't figure out why she's sleepwalking, it may end up killing Mayra.

In my quest of rereading my way through my childhood and the upcoming Fear Street movies coming to Netflix, I soon realized there were quite a few of books that I never purchased in the Fear Street book series written by R.L. Stine. The Sleepwalker (Fear Street, #6) was the next book in the series that I wanted to read, but it was one of the ones I never owned or read, so I searched for a used copy of it online.

After a week of searching, I finally found a "reasonably" priced copy of The Sleepwalker (Fear Street, #6). When I received the book in the mail and opened up the package, the book had an overpowering smell of perfume mixed with cigarette smell. This definitely makes me never want to purchase a book from the seller again because it made no mention of the cigarette smell.

As far as how I liked The Sleepwalker, I was a little disappointed in the storyline as it seemed to drag a bit even with it being such a short book. I found myself rushing to finish the book because I was a bit bored. I didn't see the twist coming at the end of the book and never suspected the character who was the "bad guy", even with the few hints that were dropped. As for the main character, Mayra, I found her to be very annoying and immature. She felt like she should have been middle school aged instead of an upperclassman in high school. In fact, I didn't find very many of the characters very likable, which may have contributed to my struggle with the book.

Three out of five stars is what I rated The Sleepwalker (Fear Street, #6) by R.L. Stine. If you liked this book, you may enjoy reading Help Wanted by Richie Tankersley Cusick.