The Wrong Number (Fear Street, #5) by R.L. Stine is about best friends Deena Martinson and Jade Smith being typical teenagers and playing pranks on their classmates. When Deena's half brother Chuck catches them in the act, he gets involved, and things go horribly wrong when they call the wrong number and overhear a crime taking place.
In rereading this book for the first time since I was a teenager, I only vaguely remembered the plot of The Wrong Number, so it was like reading it for the first time again. Although I thoroughly enjoyed the story and had moments where I felt uneasy, I was disappointed in the fact that there weren't really that many twists and turns.
Additionally, it didn't age quite as well as some of the other books just because not many people have landlines anymore. Those who do still have them, have caller id now, so it's quite difficult to prank call someone now. In this day and age, people typically don't answer the phone if they don't know the number or if it's blocked. It's crazy that there used to be a time when we'd answer the phone without knowing who was on the other line!
All in all, The Wrong Number (Fear Street, #5) by R.L. Stine is an enjoyable young adult book, and my reread of this book was a great blast from the past. I give it four out of five stars.

Morgan Taylor Professional Nail Lacquer is a great product that I discovered at Sally Beauty Supply when the sales clerk mentioned that it was buy one get one free. I purchased two bottles of the nail polish to try out. Recently, I ordered two bottles of Morgan Taylor Professional Nail Lacquer online on Amazon.com. One of those colors is Go for the Glow . It arrived last Friday, and I decided to try it out that night. As I started to paint my nails, I noticed the nail polish was a lot thinner than the ones I purchased from Sally Beauty Supply. I also noticed that it was a bit streaky, so it did take four coats for it to look like it should. However, each coat seemed to dry quickly, which was a plus in my book. It actually took my base coat and top coat longer to dry than the actual nail polish. With that being said, I did a lot more cleaning over the weekend . . . dusting, dishes, sweeping, mopping, etc., and I found that the nail polish started wearing off a lot quicker. By the end of
Read more 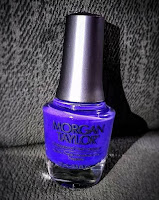 Last week, I decided to repaint my finger nails with Morgan Taylor Professional Nail Lacquer in the color "Anime-zing Color" and OPI Nail Lacquer, "Tinsel, Tinsel 'Lil Star". I also used a different base coat and top coat than I did the first time I did my nails. When I bought the Morgan Taylor Professional Nail Lacquer "Anime-zing Color" at Sally Beauty Supply, it looked as though it was a periwinkle blue in the store. I decided to give it a try because it was buy one, get one free. I was super excited about the color. However, when I started painting my nails, it came out much darker, and in certain lights, it almost looks navy blue. I am a bit disappointed about that, but I still like the color. The nice thing about about the polish is that it's a bit thicker than the OPI Nail Lacquer, so I didn't have to apply more than two coats. With that being said, I had to be more careful in applying the polish to my nails because it was very easy to g
Read more