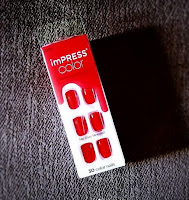 Not too long ago, I received a Vox Box from Influenster.com. It included several complimentary goodies for me to try out in exchange for my honest review. One of the items I received for free was imPress Color Press-On Manicure in the color of Reddy or Not. I was very excited to receive this product as I've been on a kick with doing my nails so that they look nice.

I was surprised at how easy the nails were to put on. There were three simple steps to follow. The first step was to clean off my nails with the prep pad that was included in the kit. The second step was to find the press on nail for my fingers and pull the tab off. The third step was to press on the imPress Color nail. 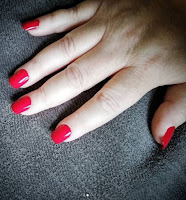 The color and nails look very nice on my fingers, and they are very slim and comfortable. They are attached quite firmly, and I haven't had any pop off yet, which is a nice change. They're also quite natural looking, which surprised me.

There was also no mess or fuss when putting them on and only took approximately five to ten minutes to do. So if you're in a hurry and need your nails done before leaving home, this would be a perfect product for when you're in a rush.

However, I'm not a fan of the square cut of the nails. I'm more of a rounded tip type of girl. The nails are quite long as well, so it makes it a bit difficult for me to type, so I may have to file them down a bit.

I give them five out of five stars despite them being a little too long for my taste. I definitely look forward to trying some of their other colors out.