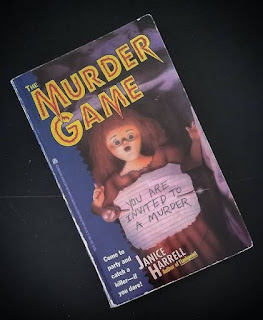 You're invited to a murder . . . that is how the ad read, but in all actuality, it's an invitation to an unsupervised birthday party at the vacation home of Dusty Ellis. Meg Redding is the only one who knows the true motive behind Dusty holding the murder mystery party . . . to find out who murdered his twin sister and why. However, when one of the guests turns up dead, everyone is on edge and don't know who they can trust in The Murder Game by Janice Harrell.

The Murder Game by Janice Harrell is a young adult novel that I read as a teen. I remember being completely on edge the entire book and was taken by surprise when the killer was revealed. When I decided to reread this book as an adult, I didn't remember much about it other than what I've already mentioned. What I enjoyed about reading it as an adult is that Janice Harrell did a nice job of laying out motive of several of the characters and giving clues as to who the killer was, and as an adult, I was able to figure out who it was from the beginning. I did love that one of the characters knew who the killer was and was blackmailing the killer. The storyline was a nice take off of Agatha Christie's And Then There Were None.

Five out of five stars is what I gave The Murder Game by Janice Harrell. If you enjoyed this book, I'd recommend Temptation (Secret Diaries, #1) by Janice Harrell or And Then There Were None by Agatha Christie.

Labels: agatha christie and then there were none janice harrell murder mystery secret diaries temptation the murder game the secret diaries