Book Review: The Face on the Milk Carton (Janie Johnson, #1) by Caroline B. Cooney 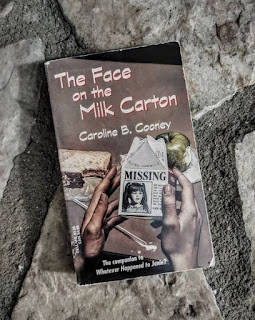 The Face on the Milk Carton (Janice Johnson, #1) by Caroline B. Cooney opens with Janie Johnson and her friends laughing and joking at lunch about the missing children on the milk carton. As Janie takes a closer look at the carton, she realizes the face staring back at her is that of her three year old self. How could this be happening?

Even though this was an extremely popular book in my middle school years, I had completely forgotten about The Face on the Milk Carton until a friend marked it as 'read' on Goodreads.com. I immediately ordered a used copy of this book as well as some of the others in the series. I was surprised that there were five books in the series as I thought there were only two books.

On top of that, I was stunned to find out that Caroline B. Cooney was the author as I knew her only as writing horror novels for young adults. I must not have read the book as a kid because I think I would've remembered who wrote it. However, I do know that I did watch the television movie starring Kelli Martin, and the ending of the book is somewhat different from what I remember being said in the movie, which is another reason why I don't think I ever read the book before.

With that being said, I thought The Face on the Milk Carton was written exceptionally well, and I was surprised at how well written it is, especially considering the target audience is twelve to fourteen year olds. The character of Janie Johnson was spot on . . . she was clearly upset to find out that she might have been kidnapped and obsessed about how she should handle the situation. I mean who wouldn't act the way she did if they were a teen in the same position? The descriptions of Janie's friends and how they acted were written perfectly. It definitely took me back to my high school years (and made me glad that I wasn't in high school anymore)!

I love how Caroline B. Cooney handled the topic of child abduction, and it's still a relevant topic all these decades later. The only thing that dates the book a little is that cell phones weren't as prominent back then as they are now, and they definitely didn't have GPS on them to use for directions. So, I think kids today would wonder what pay phones are and wonder why they were stopping to ask for directions instead of using their cell phone.

Five out five stars is what I gave The Face on the Milk Carton (Janie Johnson, #1) by Caroline B. Cooney. If you enjoyed this book, I recommend Missing (Fear Street, #4) by R.L. Stine.