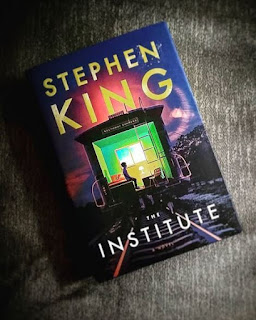 To say I was excited about Stephen King's newest book, The Institute, coming out last year is an understatement. However, I wasn't sure I wanted to pay full price for a brand new book, but while shopping at BJ's Wholesale Club, they were selling The Institute for under $16.00, so it was an easy decision that I should buy a copy. Although I was super excited about this book, I needed to wait a bit to read it because I was reading another of King's books.

There were a few things that I loved right off about The Institute. Since most of Stephen King's books take place in the Northeast, at least that is the impression I've gotten from the books I've read by him so far, I was extremely surprised that several cities in the Southeast were mentioned. The one I loved the most was the mention of Marietta, Georgia, which is where I grew up. It's in the Metropolitan Atlanta area, so it isn't some small town, but unless you live in Georgia, you've probably never heard of it.

I also loved that he brought up George R.R. Martin's A Song of Ice and Fire series. (A Game of Thrones for those of you who don't recognize the official title of the book series.) I think when one of the characters made the statement that he didn't watch the television show was an autobiographical tidbit about Stephen King. Who else felt that way?

Then, there was the blast from the past when the song Mambo Number 5 was mentioned. That was a very popular song from my high school days, and it was a song that I absolutely loved. Later in the book, Stephen King made a mention of the movie adaptation of his book The Shining (The Shining, #1) without specifically mentioning it. I loved this since I just finished reading this same book not too long ago, and it made me want to watch the movie again. A little further on, he mentions The Walking Dead! I haven't watched that show, but I love all the references he's making. Usually, it annoys me, but King does it so well that it doesn't detract from the story.  There were so many other references to other things that it would take up to much time to list them all, but I absolutely loved them.

As with all of the books I've read by Stephen King, he takes his time with the set up of The Institute. This causes the story to be a bit slow at first, but I don't think it's a negative. It was still really interesting to me. However, once we got to the meat of the story, it started to get even more engrossing, and I found myself rushing through the book and had to slow myself down so I didn't miss anything.

I haven't read a lot of books written by Stephen King, but of the ones I have read so far, The Institute is my second favorite book by him, only to be outshone by 11/22/63. My rating is five out of five stars.

Synopsis of The Institute by Stephen King:  Child prodigy Luke Ellis is kidnapped from his home in the middle of the night and taken to a remote location in Maine. The sinister government run organization known as The Institute tests children with telepathy and telekinetic abilities. All the children start out in the "Front Half" before graduating to the "Back Half", where they check in but never check out.